Dora The Explorer: Travel And Exploration In D&D

I’m not lost, are you lost?

As a parent of four, children’s shows of all kinds have played in the background of my home for a decade. Children’s shows strongly feature patterns, to the horror of parents but the delight of children. Why? Because in a sea of chaos, the predictability of the character’s catch-phrases or songs provides a sense of stability and structure for them. Dora the Explorer is one of my favourite “young kids” shows to have playing in the background, because it uses patterns and predictability in a way that is much less, well, annoying to parents, than many other shows.

It’s also an absolutely wonderful structure for exploration and travel. Look, I know it might sound ridiculous, but stick with me.

First, a quick overview of how Dora explores (for those of you who don’t have four kids and don’t have “I’m the map” singing itself in your head in the background…) In each episode, Dora gets a quest of some sort which requires her to travel to an unknown place. After getting the quest, she turns to her trusty map (que the song), which unfurls to show her the general location of the quest in the distance, and the route to get there, in three steps. 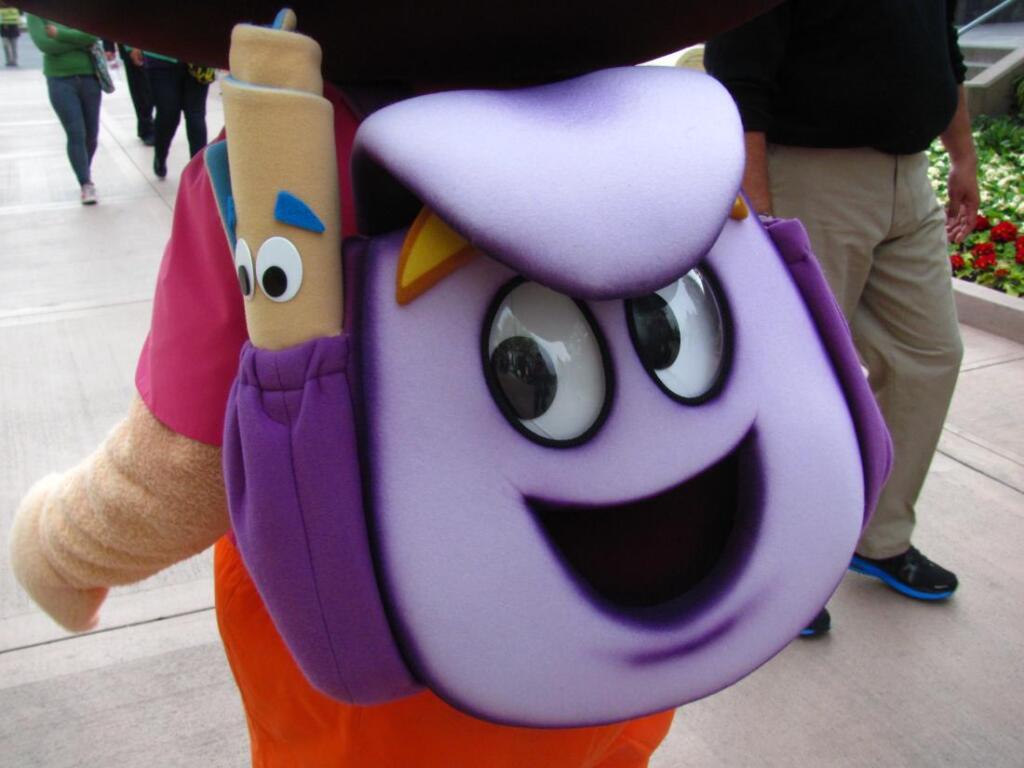 There are a few clear benefits here. Three locations, or three steps, harnesses the power of three. Three is simple and easy to remember, while having enough complexity to be interesting.

We also recognize patterns of three.
We count to three (or down from it) in races. Ready. Set Go.
We also quickly recognize three steps. Beginning. Middle. End.
We use it in storytelling. Inciting Incident. Complication or twist. Resolution.

So not only is it an easy literary device for us GMs, it’s also a pattern that your players will be able to recognize and remember.

How do we get there? Bridge. Forest. Mountain.

Returning back to our quest to reach the Mountain of Doom. Let’s say that, through the initial incident and quest hook, the players are tasked with travelling from the city to the Mountain of Doom, in order to parlay with a powerful earth elemental who resides there.

How do we create a travel plan that is interesting and challenging, also allows for exploration, but doesn’t leave the players feeling completely out of their depth and unsure how to proceed? That all becomes possible, with Dora! (I can’t believe that is a sentence that I just wrote but hey ho there you go.) We’re going to use Dora’s 3-steps as our travel structure: Bridge. Forest. Mountain.

As a GM, you can give your players the 3 steps, right at the beginning of the quest. The wizard quest-giver says to go to the location, and suggests you talk to an old adventurer that travelled there years ago. The party finds the old adventurer, who says that in order to get to the mountain, they first must cross the mile wide chasm (there is a sketchy but passable bridge), then travel uphill through the overgrown forest filled with fey, then climb the mountain pass until they reach the Cave of Doom.

How do we get there? Sketchy Bridge. Fey Forest. Mountain of Doom.

But, you might say, isn’t that too predictable?! Where’s the exploration?! Where are the choices?! It’s too linear and railroady! No, not at all. In fact, it is the opposite. These three steps are a simple, yet strong, foundation ready to hold the situations a GM writes, which actually encourage creative choices and drive exploration.

Dungeon masters can have a bad habit of withholding vital information from the players, thinking that keeping those secrets creates mystery and gives the party a reason to explore; something to discover. But D&D isn’t a novel, and your players aren’t characters who automatically do the thing they are supposed to do to drive the story forward. So treat these three landmarks as vital information, and give them directly to the players immediately. 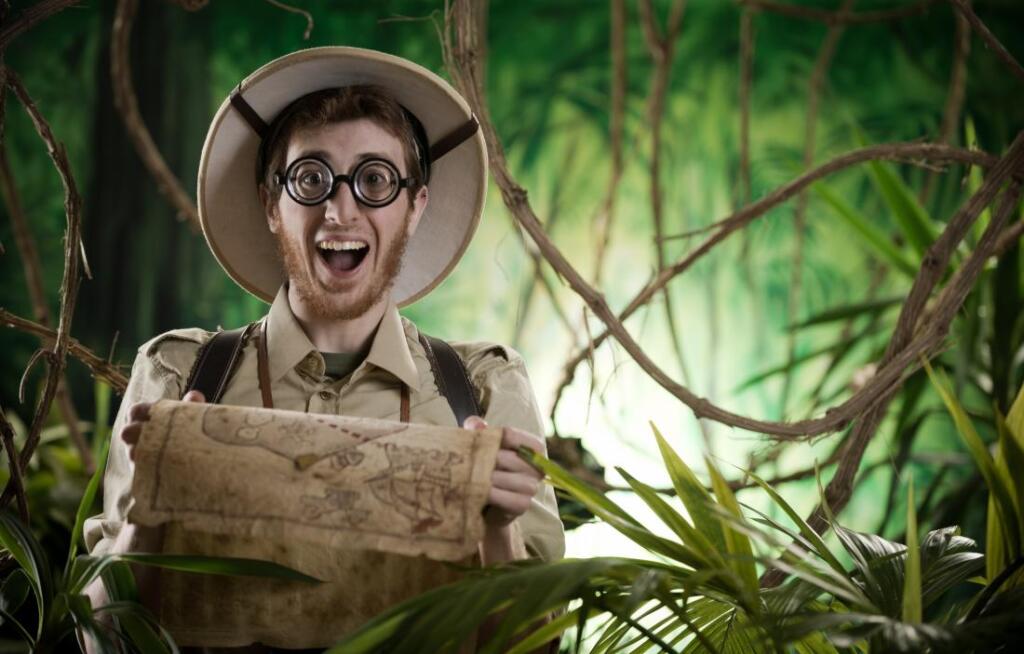 If the party has this information upfront, it also gives them a general idea of the obstacles they might face, or the areas they might explore; just enough to whet their appetite for exploration and kick-start their imaginations into high gear.

What if the bridge is more rotted than expected, and even more dangerous to traverse? Is there another way through, or around? Is there something at the bottom of the chasm? What lives in it? What if a Roc moved in?

And what about the fey forest? What kinds of tricksters, sentient plants, or wild magic zones might they encounter? Will there be patches that feel like the Feywild, or others that like the Shadowfell? Bargains with fey, or battles with undead? And what kind of OLDER ruins might they find?

Who guards the mountain pass? A white dragon, perhaps? Or maybe they find a settlement of yeti!

Giving them three general steps right away also allows the party to engage in a little research or make some preparations. Maybe the plant-lover wants to go find a plant-book that’s specific to that area, which they can use to study and maybe identify funky plants! Perhaps the lore-loving anthropologist wants to talk to an old colleague about yeti traditions and cultures.

Using this three-step Dora method really gives both you AND the players something to jump off of, creatively. It’s a foundation that you can use for travel, that invites all kinds of exploration.

Enacting the Plan: The Specifics

Now, you can take your three landmarks and make a hex map if that’s your jam. If not, you can sketch out a quick and dirty mind-map, where each landmark has a few sublocations, all of which are vaguely connected to one another. You can also run it like a basic path, where you use random tables to generate encounters, discoveries, or mini-dungeons along the way from one landmark to another. You can use NPC guides to help the players actually find the landmarks; maybe there’s only one safe path through the Fey Forest, or the mountain pass to the Mountain of Doom is nearly impossible to find.

Whatever method or variations you choose, this is your structure. The overall goal is to traverse the three landmarks to reach the final destination. And what are the landmarks? Bridge. Forest. Mountain.

A Note on Structure

As we end here, there’s a really important idea that I want to really drive home: the need for structure. New DMs are constantly asking about wilderness travelling and exploration, and experienced DMs sometimes give really unhelpful advice: Random encounter tables. Lists of monsters by terrain. Non-combat challenges. Weather effects. Philosophical discussions about the exploration pillar. None of these are bad things, and they all have their place. They are often unhelpful in these discussions though, because new DMs aren’t looking for an ingredients list for travel. They are asking for structure.

How do we create a travel plan that is interesting and challenging, also allows for exploration, but doesn’t leave the players feeling completely out of their depth and unsure how to proceed? That all becomes possible, with Dora. [social_warfare]

Using this Dora, “I’m the map” song – as silly as it might sound – provides a vital structure for this part of the game. Take the ingredients that you find the most fun, and plug it in here.

How do we get there? Bridge. Forest. Mountain.

This article was originally published by Gnomestew.com. Read the original article here.
SaveSavedRemoved 0